Who among us isn’t seduced by the idea of living forever…Or at least for a helluva long time? You’ve seen it in the movies and the characters always look amazing for their age, right? While eternal life may not be practical for us average folk, there are some powerful items that naturally appear in a variety of foods that can help treat and prevent chronic and debilitating diseases such as cancer, diabetes, Alzheimer’s and many others.

Luteolin is a bioflavonoid that naturally appea 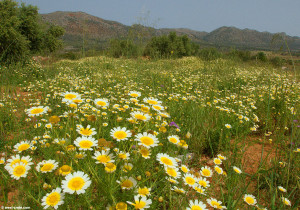 rs in vegetables, plants and herbs, such as chrysanthemum.  It has started to reveal itself as a highly important piece of the prevention puzzle. Studies have shown that those who partake of a diet in whole foods that contain Luteolin are easily able to prevent certain diseases and slow others. If they already have these ailments, while they cannot cure themselves, they can reduce the severity of the issues they endure. Studies done in 2010 also show Luteolin laden foods as memory boosters.

Since Luteolin reduces inflammation and aids nerve and muscle function, it is often referred to as a super food. It can be found in items like peppermint, rosemary, celery, artichoke leaves, safe, lemons and many others. It is simple to increase your diet in these areas and start to see the benefits of Luteolin.

Traditional Chinese Medicine also contains many herbs with the element embedded.  However, doctors of Chinese Medicine do not prescribe herbal formulas based on their Western pharmacological compounds, but rather on a combination of herbs that work together synergetically in a systematic and holistic way of alleviating disease and disharmony.  The idea of a pro-active as opposed to reactive approach is part and parcel to holistic medicine and therefore managing inflammation is an integral part to 1000 Folded Cranes’ herbal formula prescriptions.

So while it is unlikely  you will live forever (eh, Keith Richards aside), if you want to live a healthy life for as long as possible, Luteolin is a great place to start. For reduction in age-related inflammation, cancer prevention and many other areas, it has been shown at the top of its game. Research some of your whole, natural foods and increase your intake of those with Luteolin. Supplement that with TCM herbs and your body will thank you.

Why Acupuncture Should Be Your Go-To For Pain